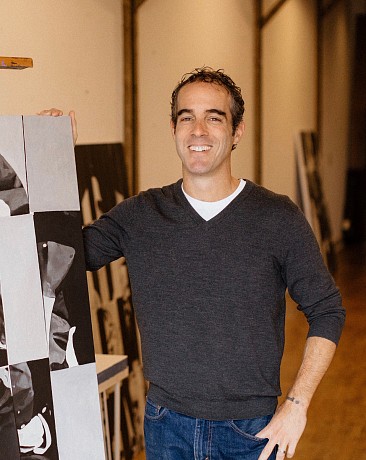 Dane Carder is a self-taught artist that has recently returned to abstraction after twelve years of creating realistic paintings based on historic, nineteenth century photographs. His new work is rooted in symbolism and is inspired by the Spirit of both human and Mother Nature. “What it means to be human,” haikus, and meditation are some of the specific influences that are currently steering the aesthetic of the work. The paintings read like enigmatic road signs on the path of the Spirit as it navigates life’s journey. His early interest in graphic design shows up in this series of work, where eye-catching impact is sought through simple, bold design. Concurrently, it is stillness and quiet that are the hopeful result of viewing these “Portal Paintings.”

Dane has exhibited in variety of galleries, museums, and art spaces over the last two decades, and has passionately worked as a curator in various venues to promote other artists’ work. The desire to create beautiful and meaningful objects to share with others is a driving force behind his studio practice, as he believes the constructed environment has an opportunity to be both therapeutic and inspiring.