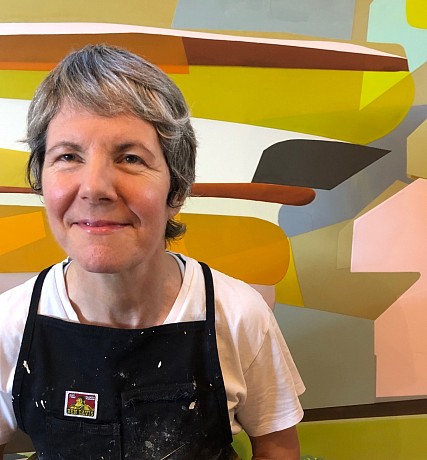 Susan Dory is a process-oriented painter who begins each painting without a preconceived image in mind.  Instead, she starts with a concept that has developed from reading and taking in a lot of information, and a color palette she wants to explore.  She works flat and demands particular materials: acrylic paint at about the viscosity of house paint and clear acrylic medium.   The first step in the process is to brush paint onto the canvas in a pattern or shapes that reflect her original idea.  Then she pours on clear coat, a type of acrylic varnish, to seal it.  This process continues until she is finished and may involve up to seventeen layers.

If Not For You, Geoffrey Young Gallery, Great Barrington, MA

The Shape of the Plan, Walker Contemporary, Boston, MA

Paintings That Paint Themselves, or So it Seems, Kresge Art Museum,

2016 Art in Libraries: A Visual Journey of Possibilities, Knowledge and Imagination, King County

Bryant, Elizabeth, “Six of One, Half Dozen of the Other.” Art Access, December 1996.

TEW Galleries is one of Atlanta's Leading Contemporary Galleries since 1987