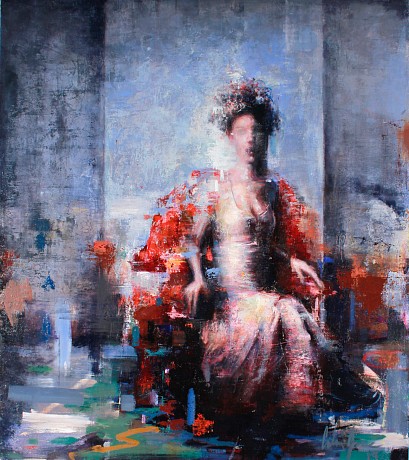 Anyone who has been around me long enough has heard me say I am convinced I was a painter in a past life.  However, in this lifetime I'm a gallerist and part of my work is to develop close relationships with artists in order to understand, nurture and share what they create with the world.  This is always interesting, but it is particularly wonderful when an artist finds the courage, fortitude and vision to reinvent himself (or herself) in a powerful and surprising way.  Such is the case with Calvin Jones, an artist we have shown before but whose development I have been following closely for several years.

Calvin became a highly successful landscape painter in Atlanta in the 1990's and 2000's.  In need of change and new inspiration, he moved to New York in 2008.  Returning to Atlanta two years later and still finding himself in an artistic crisis, he began to focus on new subject matter.  With time, the crisis transformed into a creative rebirth as he slowly gave new expression to his imagination, feelings and extraordinary painterly abilities, some of which were developed in the movie industry, where, as a set painter, working fast, and being clear on how to produce the desired end result, are requirements.

There are few artists who can create a painted surface that is both athletic and elegant, but Calvin does this and it gives his art a presence that is both manly and incredibly sensitive.  In addition, these paintings, which I call imagined portraits of women with one standout portrait of Tom Ford, are powerful elegies to both presence and absence and speak to the important role women have played in the artist’s life, and the ways in which our society looks at, and also overlooks, the beauty and power of the woman.

Great art has an ability to both tell us what we see and suggest what we can’t.  However, to pull this off, it requires an artist with highly developed skills and unique talents.  Calvin has both and, using rich, jewel-like colors, he switches between creating complex, textured surfaces, and laying down elegant brushwork, all the while, outlining his world of beautiful women.  View the digital catalogue.